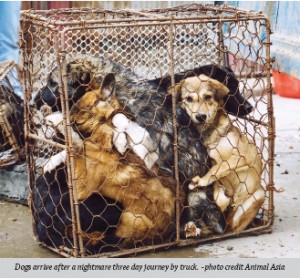 Amid a long list of various petitions and campaigns circulating addressing the consumption of dogs, and cats to a much lesser degree in South Korea, about 500 Korean Dog Meat Association members rallied Sept. 24 to demand the government legalize the farming of dogs for meat saying there are at least 20,000 dog farms with six million dogs. Exact statistics are hard to come by, but it is estimated that around a million dogs and a few thousand cats are killed each year in South Korea to make medicinal elixirs and for direct meat consumption.

Unfortunately for the dogs deemed “meat,” death does not come easy. Packed tightly in small cages pressed against each other, they suffer hours of transport from rural farms to the slaughter houses or the live animal markets.

Slaughter houses prefer electrocution for its speed. The markets often club the animal, sometimes leaving it injured but alive, before boiling it. Traditionally, dogs are hung up by their necks and beaten to death to release stress hormones that those who consume the meat that way believe makes it tastier and more healthful.

Koreans have a long history of eating dog meat. Historical evidence shows the practice goes back thousands of years and many modern Koreans consider it part of their cultural heritage.

Cats are neither popular as pets, nor for their meat, but are used mainly as an ingredient in something called “cat liquor,” which is believed to treat arthritis and rheumatism. It is made in the same way as “dog liquor,” by boiling the animal in a pressure cooker until it liquefies, and then

Posted On November 30, 2021
Dear IAKA Supporters,I hope you all are healthy and safe and remain so through the holidays and into next year. I know it has been…

Mail these postcards to the President of Korea

Posted On November 19, 2013
Help stop the torture and consumption of dogs and cats in Korea by mailing these postcards to the President of Korea. Postcards are free to…