Instead of our normal newsletter, I wanted to write you a personal letter sharing IAKA’s story and the organization’s changing direction. Since I first began advocating against animal cruelty in South Korea nearly twenty-four years ago, a lot has changed, and changing times require new approaches. I’d like to take this opportunity to talk about where we’ve been and where we’re going.

My deep love for animals first ignited into activism in 1987, when my sister, Sunnan, asked for my help to raise awareness about South Korea’s dog and cat meat trade. At the time, I was living in the U.S., and my sister was living in Daegu, South Korea. My location and my familiarity with English allowed me to reach out to large organizations in the West that Sunnan couldn’t connect to on her own.

When we first started campaigning, my sister and I believed Koreans would stop eating dogs and cats as the country became more developed—the practice had mostly become popular because of widespread poverty and starvation during and after the Korean War. We were surprised when we found the opposite to be true: profit-driven traders falsely advertised the health benefits of dog meat and cat juice, growing the industry as the country became richer. In response, Sunnan and I continued contacting world organizations about the abuses of cats and dogs in South Korea. Soon, we earned a reputation as the country’s animal protection pioneers, and international animal rights groups began contacting us. In 1988, the International Fund for Animal Welfare (IFAW) visited my sister’s animal sanctuary in Daegu City and asked for our help with their ongoing investigation of South Korea’s dog meat markets.

After their visit to Daegu, IFAW representatives invited me to assist with organizing a large-scale demonstration in London during a diplomatic visit from South Korea’s president, Roh Tae-woo. The demonstration was covered widely in the media, and over two thousand people

gathered in protest, marching from London’s South Korean Embassy to Downing Street. The negative attention so mortified President Roh that the government finally pledged to put animal welfare regulations on the books. The following year, IFAW appointed me as their South Korean representative to oversee the creation of Korea’s very first bare-bones animal protection law. As a full-time IFAW liaison, I moved back to South Korea from California.

In 1991, the same year the law was passed, my sister and I established South Korea’s first animal protection non-profit: Korea Animal Protection Society (KAPS). Over the next five years, KAPS established the first spay and neuter program in the country, published a series of books about caring for animals, and quite literally introduced the phrase “animal protection” into South Korea’s lexicon.

During this period, I also tried to keep our cause in the international media by reaching out to television and print news outlets, mostly in the U.K. One outreach campaign resulted in my participation in Dog’s Tale, a BBC documentary about dog meat consumption in Southeast Asia. The original version of the film aired in its entirety in the U.K. and Europe, but I learned later that the segment on Korea’s dog meat market had been edited out for American television. I was frustrated that the Korean dog meat issue had been left out, but I didn’t fully understand the implications of its omission. This was my first taste of troubles to come.

In the face of this warning sign, I still believed that the best way to effect policy change in South Korea was to attract international attention to Korea’s animal abuses. In 1997, I returned to California to establish an organization that would work to put South Korea’s dog and cat meat trade on the world forum’s agenda again. Still hopeful that I could drum up media support in the U.S., I founded International Aid for Korean Animals (IAKA).

After two years of building up a support base, IAKA faced its first major challenge: South Korean Congressman Kim proposed a bill that would legalize eating dog meat. Many world animal protection organizations actually supported the bill because they believed legalization would lead to better regulation and humane slaughtering, but IAKA 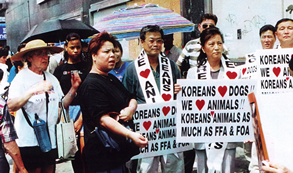 countered the bill by launching an international campaign spanning four years. With the help of local activists, IAKA organized protests across the United States, the United Kingdom, Australia, Norway, the Netherlands, and Belgium. Despite threats from the South Korean government, we timed IAKA’s protest in Norway to happen during the Nobel Peace Prize 2000 ceremony, where then-president Kim Dae-jung was to receive an award. IAKA’s carefully planned protests were enough to stop Representative Kim’s bill from passing into law.

Though excited by this victory, I was reeling from another hard lesson about U.S. media. Yet again, the American media had remained silent about our issue. I began to suspect that U.S. media and politicians discouraged involvement in South Korea’s domestic policy to maintain the country as an ally.

Even if this hadn’t been the case, a change in the international political climate soon ensured that IAKA would never gain enthusiastic media or government support in the United States. On September 11, 2001, the attack of the World Trade Center created a new world order. In the year following the 9/11 tragedy, the Bush administration took an aggressive position toward any nation supporting terrorists or pursuing weapons of mass destruction. He named North Korea as part of the Axis of Evil, and his administration’s zero-tolerance stance further strained already tense relations between North and South Korea. As a result, relations between the United States and South Korea became sensitive.

This shift in U.S. politics affected IAKA directly. Just before 9/11, I persuaded an influential U.S. statesman to advocate against the dog meat trade in his upcoming meeting with President Kim Dae-jung. Around the same time, I was lobbying with Ark Trust Founder Gretchen Wyler (who recently passed, sadly) to form a congressional committee against dog meat consumption in South Korea. After 9/11, the statesman’s meeting with President Kim Dae-jung was canceled, and the congressional committee didn’t materialize.

Even so, I managed to organize one more international campaign after 9/11. In 2002, I collaborated with a British documentarian on Hope, a film about South Korean dog markets. We built a groundswell of support and attracted substantial media attention by releasing the film just before the FIFA World Cup in South Korea. IAKA’s most effective demonstration since 1997, the Hope campaign convinced South Korean government officials to cooperate with our organization on improving animal protection. The government admitted that the 1991 animal protection law needed to be tougher, more comprehensive, and more enforceable. But they maintained it would be too difficult to outlaw the dog meat trade, arguing that too many unskilled 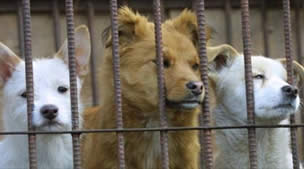 workers depended on the multibillion-dollar industry to shut it down.

The dog meat industry served these unskilled laborers so well that they were able to contribute large sums to politicians and lobbyists, making the political influence of the dog meat industry much greater than that of animal protection NGOs. Also, the older generation of men—the biggest consumers of dog meat and the most powerful segment of South Korea’s population—used their political and financial clout to prevent the illegalization of the trade.

KAPES co-founder, Haesun Park, and I were also interested in establishing our own direct service facilities within Seoul—offering public education and adoption and veterinarian services. Just a few years after founding KAPES, we secured a half million dollar grant to purchase a property for our planned Adoption and Education Center (AEC). And after a long search for the right building, IAKA granted KAPES an additional one hundred thousand dollars to cover the cost of remodeling and the installation of the vet clinic. In fall 2010, we finally cut the ribbon on KAPES’s Adoption and Education Center. Now, the Center has almost reached a point of self-sufficiency, supporting its charitable and educational work with income from its veterinarian clinic.

With a stable foundation in place for AEC, it’s time again for me to consider what’s next. Looking to the future, I see a need for modernizing IAKA’s advocacy strategies. In recent years, social media and web campaigns have become important tools for activism. Having witnessed the incredible power of these tools, I’ve decided to stop sending our seasonal newsletter for now. I will keep sending postcards and letters for advocacy campaigns as the need arises, but, more and more, IAKA will be using online and social media instead of print. We’ll finally be joining the twenty-first century, promoting our cause through Facebook, Twitter, and our new and improved website.

I’m hoping gradually to build up a campaign for the 2018 Winter Olympic Games in Pyeongchang. If the tension between the United States and North Korea eases, it may be possible for IAKA to organize a protest more successful than the 2002 South Korea campaign.

We’ve been so immensely grateful for your support, and we hope you’ll see us through this period of transition. We plan to stay in the fight—we just need to change our tactics—and we’re counting on you to be in our corner!

Support IAKA and Korea’s companion animals by purchasing these stunning full-color, folded greeting cards. All cards are blank inside and include envelopes, so they’re perfect for personal use or as gifts. To learn more, visit our greeting cards page here.

We've just launched our page on #causes.com to help raise funds for our campaign…

Posted On March 4, 2014
We've just launched our page on #causes.com to help raise funds for our campaigns! Now you can make donations towards IAKA using the secured payment…

Posted On August 3, 2012
Wall PhotosThis is Donghae City Council shelter in Gangwon province, probably the only governmental shelter in Korea that actually spends the public money to take…

Thank you for all your support!