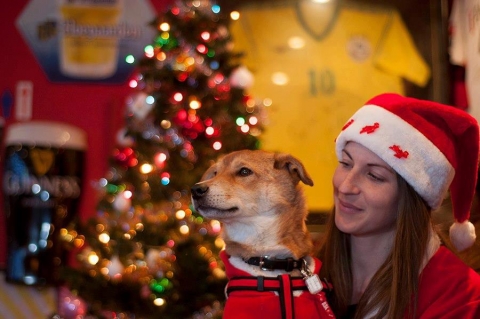 Miracles do Happen! Thanks to volunteers and social media, Boots reunites with his owner!

Timeline Photos
Sometimes, miracles in Seoul do come true. Many of us in Seoul were glued to the story of Boots, a puppy that went missing for almost 2 weeks while its owner, Claudia Mamet, searched frantically. Her creative use of social media and all out effort resulted Boots being found and a smile spread across this mega-city. We asked Claudia to write to us about the story of Boots. Here is what she said:

"On December 14th, 2012, something magical happened in the lives of hundreds of people in Seoul, and the rest of the world. A Christmas wish had finally come true because that was the day on which Boots was found.

For those who don’t know Boots, he is a six month old puppy that was adopted from the Asan Animal shelter. To a person on the street, he may seem a lot like every other mixed breed dog but to me, he is an angel who has blessed my life.

When Boots ran away after his leash broke on December 1st, my normal life stopped as I dropped everything else I was doing to devote myself to getting him back. With the help of friends – and even strangers – 2500 Lost Dog flyers were posted around Seoul, a Search Event on Facebook was created, and a YouTube video of Boots’ story was published and received over 5000 views within two weeks.

What makes this story unique is the amount of support and following that Boots received in person and online. Despite the freezing, people continued to spread the word and search all over the city. Each day, between three and twelve volunteers, most of whom I had never met before, came to help me search; often into the middle of the night. Everyone was touched by this story of Boots.

Then the day came when a computer technician spotted Boots, recognizing him from a flyer he had seen on a light post days before. Today, almost one week after Boots has been home, I am still receiving messages from Canada, America, South Africa, New Zealand, France, England, Israel and of course, Korea from people who have been touched by this Christmas miracle and who, because of Boots’ story, tell me they now have a new appreciation for their own pets and have adopted a new never-give-up attitude to life in general. You see, Boots really is an angel."

Posted On March 22, 2013
www.causes.com In S. Korea, dog meat industry is estimated at $2 billion that results in the annual slaughter of over 2.5 million dogs, served in…

Let Our Voices Be Heard! Petition against PyeongChang 2018 Winter Olympics in S. #Korea!

Posted On November 30, 2012
Holiday season is here! Support IAKA by purchasing these lovingly rendered animal greeting cards. The vibrant illustrations on each card cover are reproductions of original…