A foster dog’s journey from South Korea to Seattle 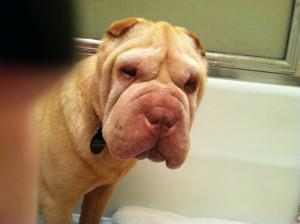 We welcomed a new immigrant into our home last night: a little dog from South Korea.

She’s in our home on a temporary visa — my husband and I are fostering her on behalf of an animal rescue organization.

Our dog Tia died in October and I wrote about losing her in a column, “We are one city, under dog.” I still think about her, even more with the presence of a new dog. I hope there’s room in my heart for both.

Our foster dog, Peach, was at an animal shelter in South Korea for many months. She has heartworm, which is treatable, but could cause early death. We are taking her to the vet on Saturday to continue treatment. We’ve been told we need to keep her calm because if she gets too excited, she might have a heart attack.

We’re all a little awkward getting to know each other. We don’t speak Korean. She didn’t want to eat dinner. She keeps bumping into chair legs. She has limited vision and needs surgery to pull her eyelashes back, which are curling inward and causing ulcers on her eye.

She already wormed her way into many people’s hearts.

It’s a miracle that she’s here. Animal Rescue Korea posted a notice about her on the Web. They sent an email out to dog rescue groups in the U.S. about her plight. One responded, Mercer Island Eastside Orphans and Waifs (aka MEOW). Volunteers in Korea raised the money to put her on an a plane to Seattle, and the Mercer Island rescue picked her up on Monday night at Sea-Tac. (Here’s a Youtube video of Peach getting picked up at the airport by Kelly Starbuck, the Mercer Island rescue organizer. The video is set to Neil Diamond’s “Coming to America.”)

I hope these miracles happen to people too.

BokDays, Hidden in the Land of the Morning Calm

Posted On May 24, 2013
This year, and for the very first time, the Cannes Film Festival will feature a movie portraying animal cruelty. “BOKDAYS, Hidden in the Land of…

Posted On November 16, 2019
Dear IAKA Supporters, There continue to be positive signs of a decrease in the number of dog farms, slaughterhouses, and dog meat restaurants due to…