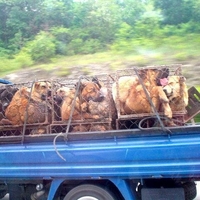 We encourage all our supporters to send letters in Protest of Korean Dog Meat! Here is a sample letter written from our Australian friends to UN Secr. General Ban-Ki Moon:

I am extremely upset about the torture and consumption of companion animals in South Korea.
With the ubiquity of social medias, everyday we are seeing shocking and heartbreaking images and videos of innocent dogs being tortured and killed in your country.

Even though Korea has established an Animal Protection Law for companion animals, dogs are still beaten, hung, electrocuted, and treated brutally by farmers and slaughters. Also, dogs and cats are still being beaten and boiled alive for so-called elixirs, which do not have medical properties except in the minds of ignorant and gullible customers.

These practices have no place in the modern world. Other Asian countries have banned the eating of dog meat and the cruel industry that goes with it, such as Taiwan and the Philippines. Why does Korea persist in lagging behind these countries and other civilized societies?

It’s the responsibility of the Korean government to once and for all end the cruel dog meat and cat medicine industries in Korea. It is time to dismiss the childish myths and propaganda surrounding these industries and their vile products. It is time to leave behind backward and unnecessary traditions.

And it is time for Korea to start taking animal welfare seriously and showing that it really does have a compassionate and ethical society. That means it is time for the Korean government to start better educating the public about the importance of spaying and neutering, about not abandoning pets, and about treating animals in a proper manner.

Until these things are done, Korea’s reputation in the international community will continue to suffer. Its citizens will continue to face shame and embarrassment. And Korea will continue to be regarded as “third world,” despite its modernization and attempts at globalized thinking.

From now on, I will boycott Korean products, and I will not support Korean companies or visit Korea until the abuse of cats and dogs has finally ended.

Ban Ki Moon UN Sec Gen (World Education) – kids in your OWN COUNTRY are taught to torture dogs??…
www.avaaz.org
We have sound evidence of South Korean kids, in UN Sec Gens OWN COUNTRY, torurting dogs. They are encouraged to torture dogs and cats and boil them alive. At a recent torture festival, toy dogs were for sale, with knifes and sticks for sale, so the kids could take them home, to beat and stabb them.

Posted On August 23, 2012
Dog & Cat Meat Trade Exposed — Animals wearing collars are STOLEN PETS. pepismartdog.com   by PEPISMARTDOG on SEPTEMBER 28, 2012 These dogs were loved by someone. Click…

Posted On November 30, 2012
Holiday season is here! Support IAKA by purchasing these lovingly rendered animal greeting cards. The vibrant illustrations on each card cover are reproductions of original…

Posted On January 21, 2013
Another Article on the Dog Cafe in South Korea. I'm surprised there aren't more places like this one! globalcrazynews.blogspot.com