WHAT’S GOING ON IN KOREA? 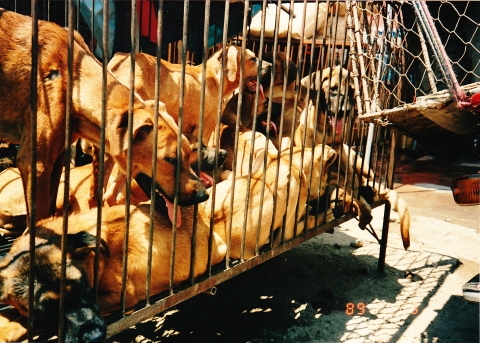 We’d like to give our supporters a quick update on what has been happening recently. So far there have been two developments in the fight against Korean animal cruelty.

First of all – some good news! Two dog-meat farms in Korea have been shut down after the government received multiple complaints from concerned Korean animal activists. The farms were repeatedly fined for health and safety violations and ultimately had to close down their horrendous operations.

This brings us to our second point. For our long-time supporters there has been a noticeable shift in IAKA’s focus and tactics. We’ve touched on it a bit before but will take this opportunity to elaborate further. There has been over 30 years of protests by international organizations (including IAKA) and it has become increasingly clear that Westerners lobbying, protesting, demonstrating and signing petitions against the Korean dog and cat meat markets have had an unsuccessful impact. In fact it has generated a lot of resentment not only in the Korean government but with many Korean people as well. These attempts to change the meat market practices are seen by some as outsiders trying to force their ways upon Korean society.

What we have noticed is a change in attitude with some sectors of Korean society, especially the younger generations. An August 28th article in USA Today claims that the consumption of dog meat is slowly fading out in South Korea which indicates that dog farms may be on the decline! (Check out the article here ).

While this is certainly not the end of the struggle, it is a bit of hope; the real beginning to the long process of truly stopping the needless slaughter of our loyal companion animals.

This of course presents us animal lovers with an extremely difficult ethical dilemma: what happens to the dogs when the farms are shut down? Ideally each and every dog would be saved and rehabilitated but, unfortunately, this will most likely not be the case. The farms forced to close will probably sell their last dogs to a meat market in order to make as much money as they possibly can in the end. If the dogs are somehow rescued, in all likelihood it will be impossible to find homes for all of them. Every farm that gets shut down will contain hundreds of large dogs, a kind of dog which most Korean people are very heavily prejudiced against. It is a heartbreaking reality and one we hope to change. 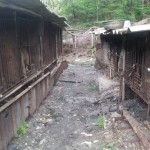 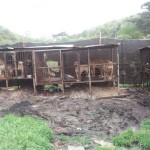 What this means for IAKA, other animal activist organizations and anyone who wants to create better lives for the brutalized companion animals of Korea is that we have to focus our energy on inspiring the Korean people to action. They are the ones who have the ability to effectively campaign against dog farmers and meat vendors, to complain to the government and to shut down the dog meat industry. The power is in their hands and we need to approach solutions to this needless slaughter with that fact in mind.

IAKA has already begun to approach the dog-meat problem from this perspective with our pro-animal and environment English language curriculum which currently in development. Additionally, IAKA is planning to launch a campaign with other Korean organizations to offer monetary rewards to people who successfully close down dog farms, dog market butcher shops, dog-meat restaurants and “health juice” bars. While this will not save every dog currently huddling for warmth in a cage, it is one way we are trying to put a stop to the sickening cycle of cruelty.

IAKA is also planning to enlist the help of other Korean organizations in order to renew our search for a Korean animal lover who we can help to groom an Ambassador Dog. In Korea the Nureongi (Yellow Dog) is looked upon as unfit for anything other than consumption. Most people, even some who keep other dog breeds as pets, would never consent to having a Neurongi as part of their household. There are a lot of nasty stereotypes and misconceptions about this dog, much the same way pit bulls get a lot of bad press here in the US. It is very easy for people to turn a blind eye to the suffering of something they perceive as being ‘beneath’ them. They are commonly referred to as ddong-gae (which literally means ‘shit dog’).
It is no secret that Nureongi are not the only dogs tortured, slaughtered and eaten in the Republic of Korea, but they are the ones that are bred, raised and farmed purely for their meat. While it is absolutely true that stolen pets and strays are slaughtered and consumed, it is infinitely more difficult to find advocates for the rights of these lovely yellow dogs. When rescued from farms and butchers, they are almost impossible to adopt domestically because of the prevailing cultural attitude towards them. If given a proper upbringing, proper care, training and love these dogs would be just as fit to live alongside the best of us. Sadly, they are never given that chance. 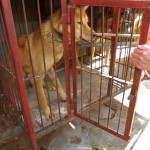 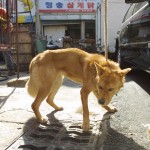 We hope to change that. We are intensifying our search for the right person in Korea who can help us shift that negative cultural perspective and seriously rehabilitate the Nureongi’s image. We are looking for someone in Korea with enough land, time, patience and love for these animals. Our plan is to sponsor them as they take a Nureongi puppy, rescued from the hellhole conditions of a dog farm, and raise the dog properly. They will train, provide proper medical care for and most importantly be loving and kind to their companion.
This dog will then act as an ambassador for its kind. It will go out in public to lectures, hospitals etc. a proper dog and show everyone that any dog can be as great or as horrible as the person/people who cares for it. People will be forced to confront the reality that these dogs are not worse than any other type or breed and that the injustices done to them are just as horrible and unforgivable as those done to any other dog.

As always, thank you for your continuing support and we will continue to update you with more news, resources and strategies for combating this atrocious slaughter.

Posted On December 28, 2012
Miracles do Happen! Thanks to volunteers and social media, Boots reunites with his owner!Timeline PhotosSometimes, miracles in Seoul do come true. Many of us in…