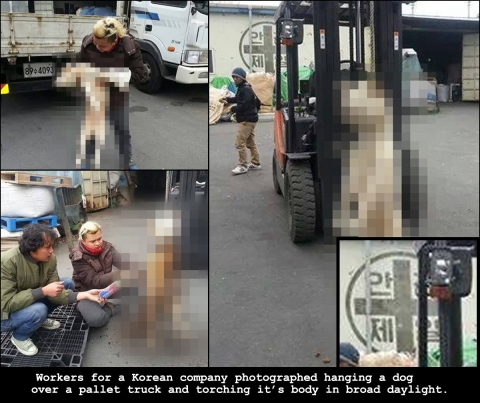 We have received unconfirmed reports that at least one of the men pictured will be facing charges.

If you have any information about the warehouse, the company or its owners please contact us immediately.

PLEASE SHARE! These men were photographed hanging and torching a dog behind a warehouse. The picture reveals the driver’s license plate and Korean logo of the company’s warehouse. Please help us find the company and the people behind this horrible slaughter. The Korean government must be called upon to punish them for the illegal hanging and torching of the dog.UPDATE:

Regardless of your position on the dog-meat trade, torturing and slaughtering dogs out in the open like this is illegal. In this case, we hope that the Korean government will treat this as a serious crime and not overlook the fact that the Korean company involved should also be considered in violation of Animal Rights Laws in Korea.

We ask that you write letters of protest to the offices of:

Posted On October 19, 2012
Environment Films is working on a feature length documentary about the illegal dog meat trade in Thailand. Already shot, the documentary is now being edited with…

Posted On July 30, 2012
Pet Dogs Abandoned and Sold by Owners for Korean Meat Market - koreaBANGwww.koreabang.comA dog-meat merchant is angered by the increasing number of pet owners who…

Posted On December 25, 2012
Merry Christmas and Happy Holidays! Don't forget to keep your pet safe and warm through the winter.