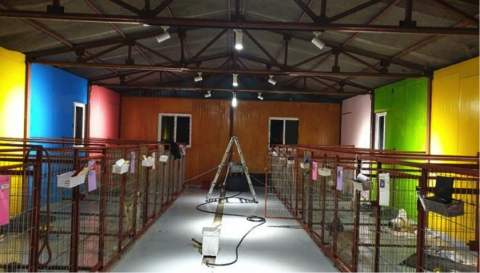 Rebel Rescue South Korea originally started as a group of volunteers at a shelter in Asan, organized and run by an elderly Korean woman known affectionately as “Granny”. Sadly, Granny passed away in March of this year. The shelter continues though, and its operational duties were taken over by a number of American volunteers with Robin Lucas, and United States expat, as President since it is much easier for native English speakers to facilitate Rebel Rescue’s international animal adoption program. Robin plans to stay in Korea for at least another year to head the operations. They also have a generous supporter who has leased the land for their new shelter in their name and pays the rent of 1.1million KRW (approximate $950) every month plus utilities. They are grateful to be able to house the animals in a nice indoor space, especially through the winter months.

Most of the dogs have been rescued from high-kill shelters, animal hoarding situations, and meat farms. They do occasionally have dogs dumped at their door or people that reach out asking them to take their animals. They took in 30 dogs at the end of August from a dog-meat farm in Gumi. Most of those dogs need a lot of work with socialization, and none of them were spayed or neutered. Also about 50% were heartworm positive so they are working to get them the healthcare they need.

As of January 2021, Rebel Rescue is now a registered non-profit organization in the US to help support the Rebel Rescue Shelter in South Korea. They rescued 151 dogs (so far this year), completed 109 adoptions, and facilitated 87 spay/neuter operations with another 23 scheduled before the end of the year.

They also moved into a new, up-to-date shelter (pictured). Some of the office and nursery areas are still under construction but it is expected to be completed soon. It is already housing rescues and dogs up for adoption.
Rebel Rescue continues to uphold Granny’s legacy of animal care and compassion for those in need.

Posted On June 7, 2012
( From Facebook )Dog owners from Osan Air Base and Camp Humphreys spent some time together at pet fest. The day kicked off with a…

Posted On November 23, 2020
Dear Beloved IAKA Supporters, I would like to be frank with you - this year has been tough. It has pushed us to our limits,…