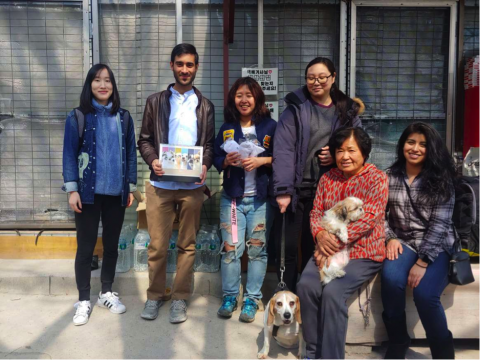 I would like to be frank with you – this year has been tough. It has pushed us to our limits, it has been full of hardships, and it has not relented one bit. Personally, I am ready for this sad and tragic year to come to a close and to move into next year with renewed hope.

Unfortunately, we do have some more bad news:

In our newsletter last year, we reported with joy that Seoul’s Mayor Park Won-soon planned to shut down the Seoul dog market. Unfortunately, on July 13th of 2020 it was reported by the BBC News that Mayor Park Won-soon was found dead after an apparent suicide. He was seen as a strong hopeful to eventually run for Korean President. I personally had hoped he would run, and be elected as the Korean President, and that he would shut down all of the dog markets in Korea.

Under Mayor Park’s administration, Seoul officials began dismantling the country’s largest dog slaughterhouse complex. A South Korean court also ruled last June that killing dogs for meat is illegal – a move which could pave the way for outlawing the consumption of dog meat as well. Consumption of dog meat in Korea has continued to decline, with an estimated 70% of the population not eating dog meat. However only 40% of the population believe there should be an outright ban.

Mayor Park’s administration (and other authorities) invoked hygiene regulations and animal protection laws that ban cruel slaughter methods in order to crack down on dog farms and restaurants. Before his death, Mayor Park signaled [regarding the one or two remaining dog slaughterhouses in Cheongnyangni] that although he could not order them to close, he intended to put pressure on them to move their operations outside of his purview.

This news of Mayor Park’s passing was a tragedy for many reasons, including the blow dealt to the liberation of Korean dogs and cats.
I am utterly heartbroken and disappointed at what is now the uncertainty of closing the dog markets and banning dog meat consumption.

BBC News July 13th, 2020: Park Won-soon was one of South Korea’s most influential leaders and was seen as a possible presidential candidate. His body was found in woods on Friday – after a note to his family was found – and his funeral began on Monday. His death came just a day after the secretary made a police complaint about his behavior.

In more hopeful news, the number of organizations in Korea dedicated to rescuing and adopting dogs and cats continues to rise drastically. When I was in Korea from 1990 to 1996 cats were treated like vermin. Now several groups have arisen dedicated specifically to helping stray and feral cats. There are now groups like Alley Cat Allies doing active Trap, Neuter, Return operations, Nabiya Cat Association for rescue and adoptions, and a number of others. Plus, there are countless dog shelters who will now take in rescue cats as well. Not to mention organizations like Yuhengsa. This group, without permanent dog shelters, actively meet on city corners and facilitate “pop-up” dog adoptions (similar to HopAlong here in the US). Many of the dog hoarders masquerading as rescues have been shut down and these new dog rescue operations are looking to organizations in countries with a longer history of animal welfare operations for inspiration on how to operate and expand. This is something I never even dreamt I would see. This is incredibly hopeful news for Korea. More active animal rescue groups and animal lovers campaigning is the foundation for stopping human consumption of dogs and cats.

And finally, some more good news that has surprisingly come out in the midst of the COVID-19 pandemic. In January this year, Chinese authorities temporarily banned the buying, selling, and transportation of wild animals in markets, restaurants, and online marketplaces across the country. Farms that breed and transport wildlife were also quarantined and shut down. In February 25th this year, Chinese authorities have issued an immediate and comprehensive ban on all wildlife trade and consumption permanently. This effectively shuttered their secretive, $74 Billion a year industry. While not a permanent solution, and done only in response to another transmission of zoonotic disease to humans, it does spell massive relief for a large number of wildlife animals in China. We can only hope the Chinese government, and all governments around the world, take more permanent strides toward animal equity and compassion moving forward.

Thank you for all of your support.

Wishing you a happy and healthy holiday season from all the dogs and cats in Korea and International Aid for Korean Animals.

Posted On December 25, 2012
Merry Christmas and Happy Holidays! Don't forget to keep your pet safe and warm through the winter.

Posted On June 7, 2013
This has been going on for decades..Please support the fight against the Dog Meat Industry in Korea. Visit our facebook page and www.koreananimals.org for more…

UPDATE: We’ve collected over 1,500 signatures in less than two weeks on changes….