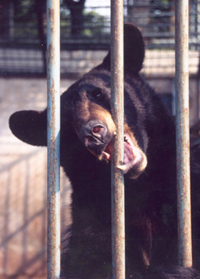 The plight of bears in South Korea is tragic. Wild moon bears are virtually extinct, and more than 1,600 “domesticated” bears are kept captive in cramped cages and farmed for bile and body parts.

Moon bears, or Asiatic Black Bears, once thrived throughout the Korean peninsula. But after years of poaching and habitat encroachment, these majestic animals face extinction. The population of wild moon bears in South Korea declined from fifty-six bears in 1980 to less than half that number in 2001. To counteract the species’ imminent extinction, the South Korean government began importing and releasing moon bears in a protected wildlife area at Jirisan National Park. But the reintroduction of the moon bear has been largely unsuccessful because the Ministry of Environment has failed to police poaching in Jirisan effectively. SBS news reported that hundreds of bear traps were found throughout the park, and other news sources reported that at least one bear was found dead in a trap. Against all odds, a meager population of around twenty bears currently survives in the park.

Though South Korea’s Ministry of Environment has pledged to slowly restore moon bears in Jirisan, they have turned their backs on the bears surviving in farms, instead protecting the interests of the 110 bear farms it should monitor. Not only are bear farms legal within Korea, but they are rarely inspected for adherence to codes of humane care, adequate facilities, and the Convention of International Trade in Endangered Species (CITES). It is believed that 85.3% of farmed bears are moon bears, even though the moon bear is a protected species under CITES and a threatened species on the International Union for Conservation of Nature’s Red List. And in addition to living in inhumane conditions, many farm bears are milked for bile. South Korea is one of three countries in the world to still allow bear bile farming.

More expensive than gold, bear bile is considered a cure-all and is widely prescribed as a treatment for a range of ailments, including liver and gall bladder disease. Overall, the worldwide trade in bear parts is estimated to be a $2 billion industry. Small packets of extracted bile sell for $200 to $250, while a whole bear gall bladder can sell for as much as $20,000. A survey by Green Korea of 163 traditional medicine shops in South Korea found that 38% secretly sold bear gall bladder, even though there are over sixty-five herbal alternatives to bear bile.

In 1981, the Korean Department of Agriculture encouraged the import of almost five hundred bears to begin breeding and export programs. Only a year later, moon bears were declared a protected species under CITES due to staunch international criticism of South Korea’s animal rights scorecard. In 1985, South Korea gave in to international pressure again, banning the importation of bears all together. Unfortunately, these supposed advances didn’t do much to improve the situation for bears in South Korea. With the decline of the export market, bear farming focused less on breeding for export and more on breeding for slaughter. Later in 1993, South Korea agreed to comply fully with CITES, banning international trade of bear gall. This capitulation also didn’t do much to help South Korean bears because CITES does not regulate domestic trade in products obtained from

A Moon Bear Caged and Abused for Bile

In 2005, South Korea’s Ministry of Environment introduced the Bear Farm Administration Index, aiming to provide guidelines for the proper handling of bears in captivity. However, the Index did just as much to protect bears as to harm them, as it introduced a policy reducing the minimum age for slaughter from 24 to just 10 years.

In 2010, the South Korean National Assembly tabled a special law on Bear Farm Management that would’ve prohibited the further breeding and sale of bears. It also would’ve made provisions for the government to buy and care for farmed bears. Though the Assembly has yet to approve this law, it has recently taken its first real steps toward reforming bear farming: in 2011, the Assembly’s budget committee approved $175,000 for research into the logistics of ending bear farming.