How Far Does the Culture Argument Go? 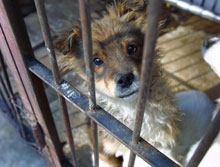 When those outside one culture analyze and condemn the practices of another, not much change happens. Each side of the issue reach a stalemate based on their core values.

In the case of dog and cat consumption, who is right and who is wrong is exactly what is at stake. When the issue is the capture, torture and consumption of Korean animals, the argument becomes a humanitarian one.

Regarless of your position on the origins of dog and cat meat consumption, the fact remains: consumption of companion animals in Korea is merely a matter of cultural choice. In addition, those demanding change many Koreans regard as cultural insensitive, even imperialist.

IAKA/KAPES presents a few compelling articles intended to de-bunk the rationale that what one culture does is it’s own business, whether or not innocent animals get hurt.