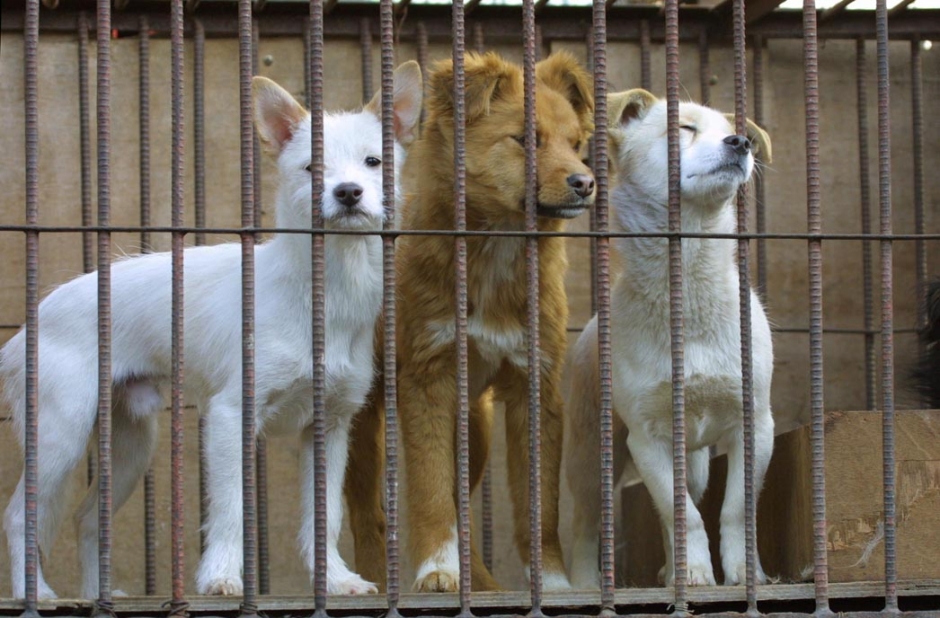 Although the Dae Jindo dog is considered a national treasure, nearly two and a half million Neurongi (yellow dogs), Dosas, mixed breeds (known as dong-gae or dung dogs), and even abandoned purebreds are abused, killed, and eaten in South Korea every year. Korea Animal Rights Advocates estimates that South Koreans consume 100,000 tons of dog meat annually, and use another 93,600 tons to make health tonics.
Today, the industry continues despite the fact that dogs haven’t had the full legal designation of livestock since the late seventies. Industry interests have bolstered the popularity of dog meat among older generations by advertising false medicinal benefits based on folk legend. In the face of scientific evidence, the industry claims dog meat enhances male virility, combats fatigue and illness, and balances the body’s heat during Bok, summer’s three hottest days according to Korea’s lunar calendar. Dr. Ann Yong-Geun—prominent food and nutrition professor at Chung Cheong University, president of The Korean Society of Food and Nutrition, and advisor to the Korea Dog Farmers’ Association—has promoted these health myths to the point of international notoriety.

In truth, dog meat proponents’ true motivation is not health, but profit—each large dog sells for the equivalent of about $300, and the dog meat trade as a whole is estimated to generate $2 billion in revenue each year. Over 20,000 restaurants in South Korea serve dog as boshintang (a chunky stew) or gaesoju (a tonic made by boiling a whole dog with herbs in a slow cooker). Gaesoju concentrate is also sold by as many as 9,000 Gungangwon health food stores, which are ironically registered by the Ministry of Health and Welfare’s Korea Extraction Manufactured Food Association.

Actually, evidence shows eating dog meat can be extremely dangerous to one’s health. In a recent exposé called “South Korea’s Dangerous Health Food—An Inconvenient Truth about Dog Meat,” a team of reporters delivered 17 different dog meat samples to the Seoul Health Environmental Research Center for testing. Seven of the samples were contaminated; and, among these, high levels of 6 types of common germs, 4 types of colon bacillus, and 1 type of yellow staphylococcus were present. In the same program, South Korean physician, Dr. Oh, warned that dog meat more often than not contains Salmonella that can’t be completely killed through cooking. The show’s reporters also interviewed farmers who admitted to routinely trading dogs with skin ailments and canine distemper and even selling the meat of dogs that died of contagious diseases.

Additionally, in the PLoS Medicine journal, Dr. Heiman Wertheim reported two cases in which rabies was transmitted to humans by eating infected dog meat. Cholera and trichinellosis have been associated with the dog meat industry, and many researchers suspect the 2003 and 2004 avian flu outbreaks began in live animal markets similar to South Korea’s dog meat markets. Moreover, since the industry exists in a legal gray area, few regulations exist for dog slaughterers. As a result, slaughterhouses are often extremely unsanitary, furthering the spread of diseases.

Another major health risk of dog meat consumption is exposure to toxic levels of antibiotics and steroids. Rather than providing a standard of care that would prevent the spread of disease, dog farmers inject their animals with higher than normal doses of antibiotics—15 to 20ml in dogs weighing around 20kg. 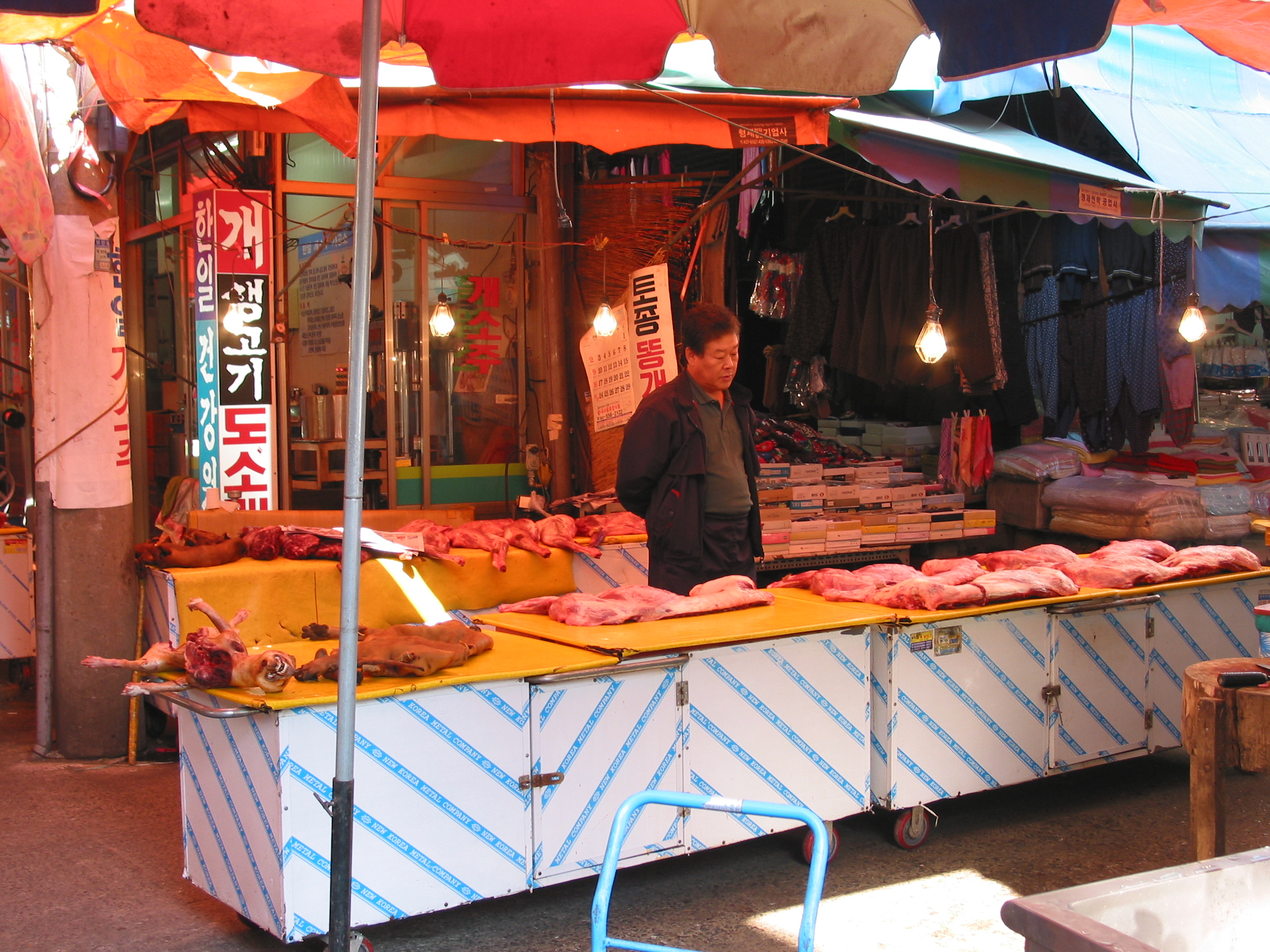 Ironically, even in the absence of the all the health threats listed above, dog meat has been shown to be unhealthy. A study by nutritionists Irwin Putzkoff, Cho Byung-Ho, and Oh Jin-Hwan showed that high levels of adrenalin, steroids, and cortisone-like secretions in dog meat caused fatigue, heart problems, and impotency in rats.

Beyond being a public health issue, the dog meat industry is a serious animal rights issue. Most farmed dogs live less than a year. They are kept in cages at all times—puppies born into the trade may never experience life outside. An investigation by Korea Animal Rights Advocate found that farmers feed their dogs both rotting human food and the ground up remains of dead puppies. For transportation, traders fill one-square-meter cages to full capacity with dogs, so the animals can’t move enough to fight. No matter how long the ride, the dogs don’t receive food or water. Traders drag dogs to and from these transport cages by the neck with a rope; in the process, dogs often sustain injuries to their spines and legs.

Many dog slaughterers intentionally prolong the pain and suffering of the dog during its killing. Traders use these cruel methods because they believe the adrenaline released by the dog’s endocrine system during torture enhances the health benefits and taste of the meat. Dogs are hanged, electrocuted, boiled, blowtorched, bled, or beaten to death, which can take anywhere from 30 seconds to 20 minutes. Even though most of these slaughtering techniques are in fact illegal under Article 7(1) of South Korea’s 2007 Animal Protection Act, dog traders continue to use them out of the public view.

Dog meat consumption does have a long history in South Korea—an archaeological dig in Changnyeong traces the practice as far back as the Neolithic period. However, it did not become commonplace until the Korean War, when widespread starvation forced the population to take advantage of all possible food sources. Rather than dwindling as the country developed, the dog meat trade rode the wave of South Korea’s postwar industrial boom. Even as the nation has become a major global player, climbing to 15 in the world for nominal GDP, the government has yet to fully adopt the animal protection standards of other developed nations.

While the practice has a strong foothold, dog meat consumption remains relatively marginal, and the younger generations are gradually seeing dog meat consumption for what it is: inhumane. In a 2007 survey by South Korea’s Ministry of Agriculture, 59% of respondents under the age of 30 said they would not eat dog meat. In a 2009 survey of Korean nationals, 60% of respondents were in favor of using dogs as pets or companions, and 55% were against the use of dogs as food for humans (Journal of Social Issues).

Even so, a combination of backward beliefs, misconceptions about dogs, misplaced nationalism, and profitability has made it singularly difficult to eradicate the dog trade completely. IAKA works to end South Korea’s dog meat industry by organizing international campaigns that advocate for stronger animal protection laws.