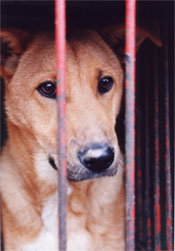 Sadly, in present-day Korea there thrives an industry that subjects companion animals to some of the cruelest forms of abuse and exploitation. Each year millions of dogs and thousands of cats are tortured, slaughtered, and consumed for purported medicinal properties of the meat. Time and time again these medicinal benefits (relief from rheumatism and increased virility) have been proven nonexistent. Despite laws protecting dogs and cats from this mistreatment, the Korean government has refused to uphold its responsibilities and enforce these laws.

Only a tiny fraction of the Korean population eats dog and cat. Most Koreans don’t indulge in this practice, and millions of Koreans are caring guardians of companion animals. It has even been stated that Koreans spoil their pets more than any other people in the world. The importance placed on a respect for animals and the environment in Korea has ancient roots and remains powerful in contemporary society. The practice of eating dogs and cats is thus a paradox that exists due to the misinformation and greed that went largely unchallenged during the periods of immense growth and change that South Korea experienced these past decades.

Korea has had a tumultuous past that left nearly all of its wildlife and wilderness ravaged by the 20th century. Even during desperate times, however, the consumption of dog was not a dietary tradition. Like anywhere else, dog was eaten only as a last-ditch resort to avoid starvation. Then sometime in the last century the practice was taken up by a few older men for mythical health benefits regarding virility. It was just an obscure and marginal tonic used by a handful of people. 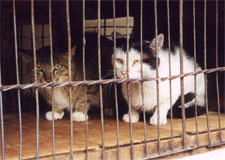 By the 1980s Korea’s amazing economic development did not bring an end to the desperate and marginal practice of consuming dogs, but instead turned it into a thriving new market based on lies and greed. This led for the first time to the consumption of tonics made from cats as a fraudulent cure for common rheumatism and arthritis. Dogs have always been one of Korea’s most beloved animals, so dog-butchers had to begin emphasizing the distinction between food-dogs and pet-dogs. Dramatic distortions of Korean culture began to appear to promote all kinds of new animal products in Korea based on unchecked exploitation of Korea’s animals and environment.

Kyenan was so shocked by seeing countless dogs and cats being horrifically killed in the 1980s that she began to act. Kyenan postponed her career as an artist and went to work for IFAW (International Fund for Animal Welfare) as their Korean representative. Eventually, Kyenan moved back to the United States and founded IAKA to build international support for Korean animals and begin campaigning for legislation to protect all dogs and cats in Korea and educate Koreans about this shameful new industry, as well as teach compassion towards all animals.

By the late 80s things had grown worse when international outrage and attention on the issue failed to shine light on the numerous caring Koreans who had already shown concern and had been working hard to stop the tragic suffering and killing for years. Similarly, the Korean media and government chose to ignore their own concerned citizens as well. This bred such an unhealthy misunderstanding about Korean people worldwide (and also nationalism amongst some Koreans) that it has prevented any truthful depiction of the plight of Korean dogs and cats – preventing any reasonable action from being taken to finally stop this tragic and fraudulent industry.

In spite of the fact that the human consumption of dogs and cats is illegal, a flourishing industry exists within the markets of Korea today. Illegal and unsanitary dog farms are hidden away in the countryside where breeders raise their dogs for the butchers. Many people mistakenly believe dogs and cats are livestock animals in Korea; consumed purely for their meat like cows or chickens. However, dogs and cats are not listed legally as livestock and have not until recently been consumed for any other reason than for their believed medicinal health properties. They still have much more in common with bears, tigers, and other animals in the illegal exotic animal-parts trade, which only strong animal protection laws and education can bring an end to.