The International Aid for Korean Animals is a non-profit organization founded by Kyenan Kum in 1997 for the purpose of raising funds to promote animal protection and humane education in Korea. Based in California, IAKA is registered with both the state and federal governments (#94-3255699).

Because Korea provides a particularly difficult environment for animals, there is a great need for such an organization as IAKA. Although there are thousands of animals in need of shelter, good homes and medical treatment in Korea, fundraising is extremely difficult there. Without expenditures it is nearly impossible to raise public support and awareness for animal welfare issues. For a source of funds we must, therefore, reach out to the broad-based international community for the specific support of Korean animals.

IAKA’s primary focus and fundraising efforts have shifted, with careful thought and consideration, towards humane education within Korea. The goal is to promote a deep compassion, appreciation and understanding of animals by changing the Korean public’s attitudes and values. 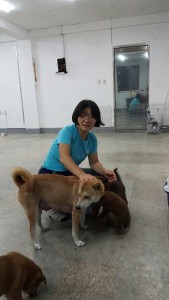 Additionally, IAKA continues to partner with Korean organizations and shelters in order to provide financial assistance and rouse international support. Some of the organizations IAKA is currently working with include KAPS (Korean Animal Protection Society, under its new Director, Mrs. Jung Ah Choi) as well as Daejeon Paws, and the Nabiya Cat Shelter. These organizations, created and run by Korean people, are at the forefront of a shift in cultural attitude toward dogs and cats.

Although campaigning and protesting the Korean government over the last seventeen years has resulted in a certain level of success (the overhaul of the Animal Protection Law is a shining example), the approach does not get at the root of the problem. The supply of dog and cat meat will exist if the demand exists. Only when people’s perceptions change will the illegal meat markets and the horrific animal cruelty vanish. To this end we have encouraged, and will continue to encourage, the people of Korea to take charge of the situation in their country and be the driving force of positive change for their four-legged counterparts.