When Kyenan left Korea in 1970 for the United States, the consumption of dogs was truly a fringe activity, primarily a result of financial hardships of the post-war years. Cat consumption was essentially unheard of. But by 1986 the stories coming from Korea, about the growth of dog meat markets and a new koyangi soju (cat tonic) took her by surprise. In 1988, Kyenan returned to Korea and made her first visit to one of the markets. Incredibly, she found that the economic prosperity that was settling on Korea had not helped the plight of animals there. Instead, the dog traders had turned virtually all wildlife into commodity. By spreading misinformation about the health benefits and curative powers of dog and cat meat, vendors and restaurant owners turned what was once a necessity of poverty into a thriving industry. With this revelation, Kyenan was convinced that something needed to be done. She began work toward establishing the first Korean Animal Protection Law (1991), and became a representative for IFAW. In 1997, she returned to the US to found IAKA.

Kyenan, an accomplished painter, currently lives in California with her 3 cats. She is also founder and director of the International Aid for Korean Animals (IAKA) which she operates from her home. She has also founded IAKA UK, our branch in the United Kingdom, and KAPES, our Seoul-based branch. IAKA and IAKA UK are solely dedicated to raising funds and support from the international community for KAPES.

The following article on Kyenan can be accessed at:
http://network.bestfriends.org/Blogs/PostDetail.aspx?bp=3948 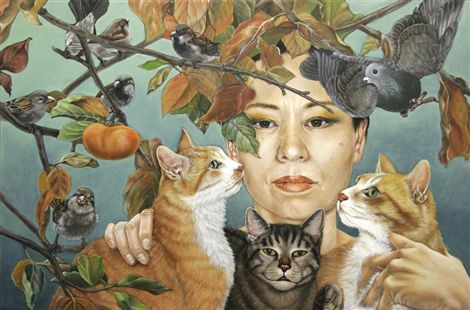 When Kyenan Kum was a little girl, her dog was drafted into the army. It was during the Korean war, and one day, South Korean soldiers came to her town, rounding up the pet dogs, saying they were needed to fight in the war. She ran after the truck that took away her beloved German shepherd, but she never saw him again. Later, she learned that the dogs had been needed partly as soldiers, but also as food for the starving army. It’s no wonder that Kyenan grew up to be something of a soldier herself – fighting for the animals. She’s been on the forefront of animal welfare reform in Korea, where she and her organization have helped change legislation and promote public education to bring about a new, happier era for the dogs and cats of her country.

It all began when Kyenan was a child. She had a progressive father who believed very strongly that his daughters should be just as educated as his sons. “My father told me and my older sisters that with an education, a woman could be anything she wanted as long she tried hard,” said Kyenan. “He was an advanced thinker for Korea in the 1950s. In most households, even in the upper middle class, men received preferential treatment and women rarely had an opportunity for a good education or profession. My father also believed very strongly in education of children as being most important for their future and for the development of the country. He helped many disadvantaged relatives and neighborhood children to get an education and was a very big influence on me.”

Her father was an acupuncturist and herbalist who loved animals, and the family had many pets. He thought that in the future, western medicine and eastern medicine would soon merge, creating the best medicine of all. And so, he encouraged Kyenan to be a part of this future and become a doctor.

But that plan fell apart when her school biology teacher insisted she dissect frogs. Instead, Kyenan, put her frogs back in their aquarium, ran out to the park and set them free! That was the end of her medical career.

But much more devastatingly, her father passed away while she was still in school. This not only broke her heart, but it left her in a bad place. Without his income, and without him there to make decisions, Kyenan was no longer going to be sent to college. Instead, the family was busily planning an arranged marriage for her. Panicked, Kyenan decided it was time to take matters into her own hands!

She was a brilliant artist. (The picture above is a self-portrait painted by Kyenan.) So she decided to apply for a scholarship at fine arts school in the United States. She felt it was what her father would have wanted for her, rather than an arranged marriage. And it worked! Kyenan was off to the United States, where she got a Bachelor’s of Fine Arts and then a Master’s of Fine Arts at the California College of Arts in Oakland. She became a painter, and supported herself by renting rooms to fellow artists to use as studios.

But Korea – and the animals – weren’t going to be left behind. They still needed her. And Kyenan realized it when she learned that eating dogs had suddenly spiked in popularity back in her home country. In the old days, she explained, dog eating was never really a part of Korean ‘culture’. It was done – yes. But it wasn’t acceptable. There were superstitions that dog could be used as a tonic to enhance an old man’s bedroom life, or that a cat could improve arthritis. These things were consumed in back alleys, on the sly. Or, people on the brink of starvation sometimes resorted to it, as was sometimes the case during the war. But it was never a part of mainstream culture, and a family would never gather around the table to eat such a thing. In fact, Kyenan remembers that most families she knew in her childhood were vegetarians because they simply couldn’t afford meat.

But in the 1980s, while Kyenan was still in America, Korea’s economy improved. Suddenly, meat was being imported, and was readily available. And according to Kyenan, the dog and cat meat industries used this as an opportunity to try to make their product acceptable and out-in-the-open as part of mainstream culture for the first time. “I thought that if a country develops economically, that the situation for animals would improve,” she said. “I was wrong. Korea went backwards.”

So she packed up all her things and got on a plane. She was going to help those animals!

First, she worked with IFAW as a Korean representative. She worked with the Korean government to help pass the first ever animal protection law in 1991. She helped organize the first Korean Animal Protection Society (an animal shelter). She published three children’s books about kindness to animals. And she helped introduce (for the very first time!) the concept of spay/neuter to the Korean veterinarians.

But it wasn’t enough. Kyenan soon found that passing a law was one thing, and seeing real change was another! She decided to open a second organization to focus on making a reality the ideals that had been set forth in her work so far. Thus, in 1997, she founded IAKA (International Aid for Korean Animals).

IAKA works not only in Korea, but all around the world to educate people about what’s going on with animals in Korea, and raise support for change. Within Korea, Kyenan and IAKA have successfully defeated many attempts to “amend” the animal protection law in ways that would make things easier for dog farmers. In fact, not only did IAKA beat out each attempt to change the law, but in 2007, they succeeded in having a much more clear and definite animal protection law passed. However, Kyenan points out that the problem of dog and cat meat “can’t be solved with laws alone.” She has to fight the demand, not just the supply. That’s why IAKA is also launching an enormous public education campaign.

IAKA is working hard to dispel the myth that dog and cat meat have medicinal properties. They’re also fighting a backlash against westerners opposing the meat. The dog meat industry has used some of the attacks on them to promote their product as a nationalistic thing to eat – supporting your culture. But IAKA is working to counteract that advertising by reminding Koreans that these products are “NOT a part of traditional Korean culture.”

IAKA has a lot of work in front of them. But many things are improving. After years of Japanese occupation, the Korean countryside was pretty much devastated of all its natural resources. But today, Kyenan points out, tree planting programs have restored much of Korea’s natural landscape. The mass starvation she saw as a child is gone, but the culture, based on Confucian ideals, sprinkled with Buddhist religious practices is still thriving. “Korea is now a vibrant, energetic nation with a beautiful natural countryside,” she said. “Korea is a 5,000 year old nation with a rich history that is preserved in many historic palaces and temples. Even the legacy of the Korean War, the Demilitarized Zone, has created an ecologically unique ‘no man’s land’ nature preserve.”

And with the help of IAKA, there is great hope that some day soon, no more animals will have to suffer as Kyenan’s childhood German shepherd did. If you would like to help Kyenan with her work or make a small donation, please visit our donations page.

Photo: Oil on canvas painting entitled “Self-Portrait with my animal family” by Kyenan Kum. You can see more of Kyenan’s art here: http://www.kyenankum.com