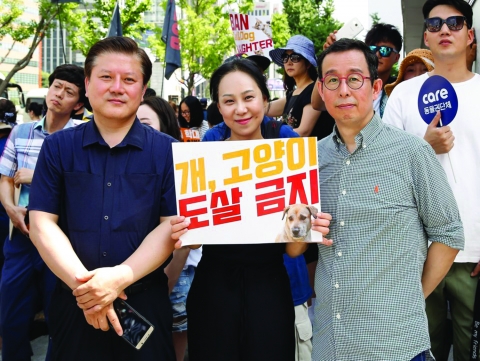 Earlier this year, a short-form documentary was produced for NHK (The Japan Broadcasting Corporation) as part of their Asia Insight series. This documentary took a look at the current state of the Korean Dog Meat Industry from multiple angles.

They interviewed protesters and activists, slaughterhouse owners, historians, dog farmers, and meat market operators. In the following we will post some excerpts, but one important thing to note about this documentary is that on the whole there was a note in change in cultural attitudes toward the “culture” and practice of eating dog meat. The general consensus was that the younger generations are trending heavily away from eating dog meat and are even ashamed of the practice. In some cases they are even convincing the older generation to give up dog meat.

EXCERPTS THAT HIGHLIGHT THE POINT

It’s long been thought to boost endurance, and is mainly eaten in the summer.

INTERVIEWEE 1: (in Restaurant): Eating dog meat improves our health and gives us stamina. I always eat dog meat once a month.

NARR: Amidst diminishing demand, the number of dog meat restaurants in the greater Seoul area has plunged from the past high of 30,000 to just 700.

DOG MEAT RESTAURANT OWNER: We get fewer customers due to increasing pet owners. But dog meat lovers come here for the health benefits that the meat has.

Some doctors recommend dog meat for quick recovery so we get patients who have had recent surgery.

This so-called dog market was once the nation’s largest, trading 80,000 dogs worth of meat annually. The market is now undergoing a drastic change.

DOG MEAT RESTAURANT OWNER: In the past, customer hand-picked live dogs here to be butchered on the spot. But now the market has no dog cages or slaughter facilities.

Kim Yongbok has been selling dog meat here since 2005. He also serves as the chairman of the Livestock Market Association.

KIM YONGBOK: We used to display live dogs, chicken, goats, and other animals but we’ve stopped. This entire aisle was like that.

NARR: The dog market changed after demonstrations by animal rights groups and complaints from residents forced the local government to take action.

But as new districts popped up, the dog market became the city center and directly beside a school route.

We decided that regardless of law, keeping dogs in a bad environment was not right.

NARR: To markets specializing in fresh meat, the ban on livestock sales is highly restrictive.

Yongbok and others initially rejected the ban but they say their perspective gradually changed.

YONGBOK: Only the elderly eat dog meat. Most young people don’t. They’re ashamed of this culture.

So we had to adapt to the times.

[Kim Nara on a dog farm]

NARR: Nara is now working to rescue dogs from the farms.

KIM NARA: Were these dogs okay?

NARR: This is a small dog farm in the suburbs of Seoul. The farm owner doesn’t breed dogs for consumption. Instead, he reluctantly sells meat from abandoned dogs.

At first, he bred Korean Jindo dogs, but as he began taking in abandoned dogs from neighbors he could no longer afford to raise them.

It’s an unusual case that differs from typical dog farms specializing in breeding for dog meat.

FARMER: It never felt good to let go of dogs. Jindo and other dogs are raised in the same way.

I have no desire to run dog farms.

I’d rather do something else to make a living than to kill these dogs.

NARR: The owner decided to quit the business a year ago, and sought Nara’s help.

[Nara and farmer survey the farm and the dogs]

Nara helps such farms get funding to switch businesses.

Nara says that increasing numbers of dog farms are going out of business due to declining sales.

We’ve met 11 dog farm owners and they always talk about their children.

Their children want them to quit dog farming.

While this documentary does not show the meat industry going away completely and finally, what it does show is a change in the cultural attitude and approach to dog meat. There is a definite and measurable trend away from its consumption, which has forced restaurants to close, and those in the industry to find or consider new lines of business. This is good news and a trend that should encourage those of us who wish to see an end to this practice once and for all!

Thank you again for your support and dedication, and for the hope you give us.

Posted On March 22, 2013
www.causes.com In S. Korea, dog meat industry is estimated at $2 billion that results in the annual slaughter of over 2.5 million dogs, served in…

Posted On March 25, 2013
Occupy for Animals shares the history of the dog meat trade and it's plight to end it in 2018. Also at the very end we…