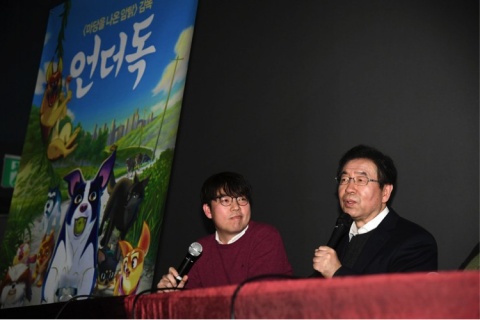 There continue to be positive signs of a decrease in the number of dog farms, slaughterhouses, and dog meat restaurants due to Korean anti-dog meat campaigns and a general change in attitude towards dogs and cats by the younger Korean generations.

According to various animal rights group estimates – between 700,000 and 1,000,000 dogs are slaughtered and eaten in Korea per year. There is no question that this is still an inexcusable number (as is anything more than zero) – but the Korean Ministry of Agriculture estimated between 1990 and 2000 more than 2 Million dogs were consumed every year. A 2017 survey found that 70% of Koreans do not eat dog meat. These are measurable advances forward.

The mayor of Seoul has announced he’ll be shutting down all dog slaughterhouses in fantastic news progressing the fight for fair and humane treatment of dogs in South Korea.

If you’ll remember, last November the country’s largest slaughterhouse in Seongnam was closed down. The Taepyeong-dong complex was comprised of six separate slaughterhouses and could hold hundreds of dogs at a time. It was demolished and is currently being redeveloped into residential and retail spaces – aimed as a place for younger people to live and enjoy.

Earlier this year the mayor of Seoul, Mayor Park Won-soon, announced that the city government would be shutting down all dog butcheries in the Korean capital as the national debate on whether or not to eliminate the dog-meat business takes place. Not only is he focused on closing down the dog-meat shops, but also transitioning dog butchers and farmers to other lines of work, and finding a humane solution for Seoul’s stray dog population – and raise their adoption rate.

In July, Busan City shut down the Gupo Dog Meat Market as well – the largest in the country after Seongnam. Animal welfare charities hailed it as a success and, as part of the agreement, vendors were offered compensation in order for them to open alternative businesses.

80 dogs were rescued as part of the shutdown and given to various Korean animal rescues. The site is also being redeveloped, this one into a public park.

That same month, Korean activists from all around the country turned their sights on Chilseong Market in Daegu, the next largest dog meat market still in business. Hundreds gathered in protest. We have included with the Newsletter a new Protest Card to put pressure on the Mayor of Daegu City to follow suit and close the dog markets.

What all of this tells us is that – while we are not at the end yet, there is a visible and measurable change in the Korean people toward dog-meat and animal welfare. This change started with younger generations and has trickled upward to local politicians, and even to some members of the Korean Congress. This change has momentum behind it now and we are hopeful that this will continue with the closure of more and more slaughterhouses, dog-meat vendors, and restaurants. We can also expect to see more and more city politicians embrace this new attitude and we hope that it will eventually result in an end to the legal grey area currently inhabited by dogs and cats in Korean Law. The struggle continues,
but the tide is turning – and we continue forward with hope.

Nabiya Cat Shelter Rescues 170 Cats from Abandoned US Army Base

As some of you may be familiar with, Yu Juyun began rescuing stray cats in 2007. She worked extremely hard with adoptions and TNR programs and the Nabiya Cat Shelter grew over time. One of the biggest challenges of the last few years involved the transition of the US Army Base from Yongsan Garrison in the heart of Seoul to Camp Humphreys, south of the city. As the Army began it’s transition in 2017, many stray and feral cats took over the abandoned Yongsan. Yu Juyun and Nabiya, along with volunteers, US Army volunteers, and members of the Korean Veterinary Association began a large rescue/TNR/vaccination operation for the cats occupying the base. To date they have rescued over 170 stray cats from Yongsan and adopted out at least 90 of them – while spaying/neutering and vaccinating countless more. Juyun is planning on conducting another TNR operation on the base in February of next year.

In March of this year, five Korean Animal Welfare groups came together to rescue 65 dogs from an abandoned dog farm in Bulgyo, in Junranam-do Province. After an initial visit to the farm to assess the situation the five groups- Nabiya Cat Association, CARE, the Korean Animal Welfare Association, Happy Animal Companions, and the Beagle Rescue Network set aside their differences and disagreements in order to share time and resources in helping these abandoned animals.

This is the first time in Korean history that a coalition like this has come together – and their hope is that it will be an example of what these organizations can accomplish when they pool their efforts and work together. Because of their hard work the 65 dogs, which later became 80 as a number of pregnant dogs gave birth, received the necessary medical care, spay/neuter operations, vaccines, and were either placed in shelters or adopted out.

Our hope is that these organizations continue to work together on these rescue operations in order to extend their reach and resources – and that they capitalize on the forward momentum that we have written about for the last two years towards the final goal of ending the horror for all of these Korean animals once and for all.

Dogs Rescued from the Farm Waiting for Adoption

Posted On November 23, 2020
Dear Beloved IAKA Supporters, I would like to be frank with you - this year has been tough. It has pushed us to our limits,…

Posted On May 17, 2012
( From Facebook )http://www.uniteddogs.com/stopkillingdogs/ Fact: Although forbidden to advertise themselves on main streets or in English, over 6,000 restaurants today serve dog meat in South…

Posted On May 17, 2013
www.english.rfi.fr Humans have domesticated dogs for thousands of years, and in many parts of the world, dogs are referred to as a man’s best friend.…