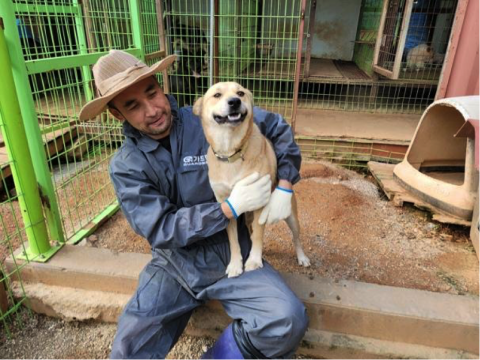 According to Rah Sungyu, a martial arts instructor and one of the founders of Hug Me Shelter, operations began in April of 2019. A stray dog had wandered into the front office of the Senior Citizens’ Center where he worked. The dog’s fur was tangled and it had a thick marking on his snout from a muzzle. He was in pretty bad condition. So they cleaned the dog up, fed him, and started training him how to walk with people.

A few days later someone reported to them that some of the Senior Citizens planned to eat the dog. They found the old folks, bought the dog off them for $100 and decided to find a good home for him. But they needed a place to house him until they could adopt him out to a good home. A neighbor told them about his sister who had a farm where she could take care of the dog for the time being. Rah Sun-gyu was very excited and grateful and went to check out the farm.

What they found were dogs living in absolutely squalid conditions. Food bowls filled with waste, scum and algae in the water dishes. Every dog there had critical skin diseases and a number of other obvious health problems. It was a dog-meat farm. The farm was owned by an old woman who would slaughter the dogs in front of the other dogs (according to her neighbor). They couldn’t leave their new rescue there – and they knew they had to do more.

Every day after that for four straight months Rah Sungyu’s wife, Shizuka, went to the farm to feed and care for the dogs and try to convince the old woman to shut it down. She finally agreed and they were able to rescue 30 dogs (by purchasing all of them). After that they built a temporary shelter to house all the animals until they could find them good homes. Unfortunately they had to move the dogs after three months because the landlord decided to sell. They placed the dogs in an outdoor dog boarding house – and into the office where they worked. They paid all the fees for the dogs and continued adopting them out.

Despite all of these challenges, in 2021 Hug Me Shelter was able to rescue another 18 dogs, provide 32 spay/neuter operations, and find homes for 34 dogs. Sungyu and his Shizuka have been actively adopting these dogs through social media, helped by the fact that Sungyu can speak and write English and has experience working with many foreign people. Dogs have been adopted in the US, Canada, and several European countries.

Rah Sungyu says of their work: “Now our office is like an adoption center and about 8 or 9 dogs stay here. All my dogs come into the office and live with us before they go to adoption. This is why we started the rescue work.”

Posted On March 25, 2013
Occupy for Animals shares the history of the dog meat trade and it's plight to end it in 2018. Also at the very end we…

Posted On October 26, 2012
Timeline Photos LIKE if you think this pup is cute. SHARE if you agree we shouldn't eat dogs. COMMENT if you think you know what…

I hope many of you have received our newsletter for winter 2013. If not, you can…

Posted On December 13, 2013
I hope many of you have received our newsletter for winter 2013. If not, you can download and view or distribute them from our website:…