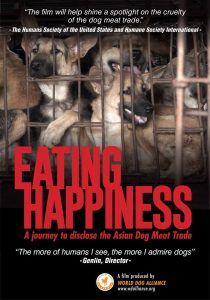 Eating Happiness reveals that 30 million dogs are killed annually in Asia, 70% of whom are stolen pets. The film sheds light on several disturbing practices associated with the consumption of dog meat in Asia including a gruelling transport to the slaughterhouse, cruel and inhumane methods of slaughter, and torture prior to death as some Asians have the superstitious belief that torturing a dog prior to death will enhance the flavor of the meat by increasing the dog’s adrenaline.

The film has acquired the support of the largest animal protection organization in the world, the Humane Society of the United States (HSUS). HSUS and their members worldwide will be publicizing Eating Happiness as the best hope to bring an end to the consumption of dog meat in Asia. The film’s incredible footage will educate millions of viewers worldwide who can add their voice to stop this inhumane practice through legislation. Eating Happiness will be submitted to the 2016 Oscars with private screenings beginning September 26, 2015, and public screenings beginning October 2, 2015.

Posted On May 31, 2012
( From Facebook )Animal Rescue Korea (ARK) is a great English-language resource website to help in the adoption of Korean animals. For an easy search…